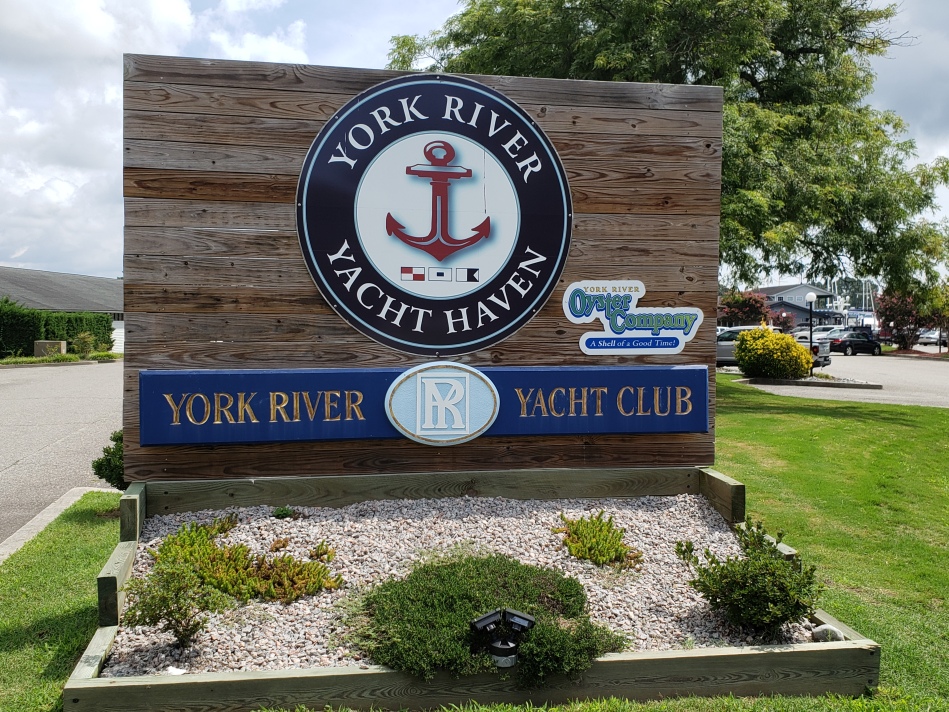 Header photo by Julie Mollica, thanks!

Our last blog, Bashing It! describing our Baja cruise north to San Diego to sell Epoch was posted from San Diego, CA  238 days ago, on February 8, more than half a year has passed. What a year it has been! For all of us, I’m am very sure!

Epoch sale started in mid-February. We were moored in Chula Vista, California Yacht Marina and moved everything off the boat and into a “POD” delivered to us by PODS.com. EVERYTHING moved. On February 18, we took a last look at little Epoch and flew out of San Diego to Savannah, GA to meet our N5536.

Exciting time! We met Don Kohlmann at the airport and the following day, James Knight and Jay Flaherty were on April K with Paul and April at Thunderbolt Marina in Thunderbolt, GA.

Following the survey and sea trial, Scott and I flew to Ohio, to my childhood home in Strongsville to help care for my mom, 93 years old, still living at home, who had fallen two days before Christmas and fractured her hip. Scott spent a week in Strongsville then flew home to Washington state while my siblings and I spent long days with my mom in the Skilled Nursing Facility. We all stayed with my mom in hopes our encouragement and cheering would help her heal quickly.  Mid-March, we were greeted by COVID-19, Ohio, California, and Washington all implemented social distancing or stay-home orders, boat sales became protracted and my beloved mom passed away. All in the same week…. Oh my gosh.

My siblings returned to their lives and to quarantine and I stayed at my mom’s home, too apprehensive to fly. March passed. And April. And most of May. Initially my flights were cancelled, but finally mid-May, I reunited with Scott in San Diego.  I joined his “camping” on Epoch. Remember, we had moved EVERYTHING off Epoch in early February into the POD.

Early June, buyers drove from Westport, WA to inspect and survey Epoch. Steve D’Antonio a Marine Consultant was coming! Steve’s knowledge of Nordhavns and reputation for detail and buyer advocacy is well known which made me a bit anxious; Steve was absolutely outstanding and a nice guy to have onboard ! Mid-June the new buyers accepted the condition of Epoch with one stipulation; replace the exhaust muffler!

The muffler replacement was a big deal. Scott worked with Harco Manufacturing to have a new muffler fabricated which involved trading lots of email correspondence, measuring and developing a design drawing. The Marine Group Boat Yard crew installed the new custom muffler in a day and a half. The factory muffler insulation was built by Temptech and arrived a week later.  We installed the custom insulation ourselves in about 30 minutes, sweet fit with built-in fasteners.

During our time at Chula Vista, some of our Taco Runners returned to San Diego from Mexico. We visited with Mike and Elaine on Pardita, Linda and Vince on N60 Last Arrow, Michele and Hugo on N55 Gitana, and our special friends, Max, Zoe on N55 Red Rover and their humans Alison and Kevin! Very fun times and wonderful to catch up!!

We also happened to be assigned the slip next to the very first Nordhavn trawler built, N4601 named UUB V. Colorful Captain George purchased her on the East Coast and after extensive cruising now lives onboard in Chula Vista, CA.

The Epoch sale closed in mid-July, uneventful with only Scott, I and Mark Gilbert on-board.  A few miles offshore, a couple of pics and Epoch was no longer ours. We docked our little Epoch, bid farewell to her for the last time, and headed back to Washington state via a 19-hour road trip.

Scott’s comment on the way home was he has never been so boatless in his WHOLE life. Well, I said, you still have the roll-up beach tender in the POD.  Oh my gosh, you’re right he said.

So, meanwhile there’s actually more to Adventures of Little Fish. Paul Smith on April K, N5536 on the east coast and Scott had become email pals (per se).  Paul and April cruised April K during the summer and eventually ended up in York River Yacht Haven Marina in Gloucester Point, VA a good location for us to move onto April K.  So Ok! We flew to Norfolk, VA mid-August. We met Paul on a spotless, mechanically maintained and well-equipped yacht ready for cruising! Paul spent most of the day with us doing ownership turnover; so patient and helpful.

Our POD traveled across the US, west coast to east coast and arrived at York River Yacht Haven Marina on August 25. We placed the POD in the nearby boat yard. We rented a U-Haul pick-up truck and in 90-degree weather, 85% humidity, we unloaded the POD packed up 6-months ago into the U-Haul, drove the short distance to the marina and loaded into dock carts and then onto the boat.  We only had a day and a half before the POD was picked up!

We have been busy unpacking and making the boat ours, transferring licenses, reprogramming electronics, getting various subscriptions converted and even replacing SIM cards.

Two of my best friends, sisters Julie and Robin drove in from Pennsylvania and we had a wonderful fun first visitors onboard!

We are expecting the name and hailing port graphics installation any day now.  We have named her Orenda, which loosely means a supernatural force believed to be present, in varying degrees, in all objects or persons, and to be the force by which human accomplishment is attained or accounted for.

Where are we going next? As it is nearly October, we will likely start heading south. Of course, it depends on COVID-19, marina availability, weather and studying the cruising manuals to learn about this new and exciting east coast.  Oh my gosh, what a year it has been!

Where is Orenda now?